Village Chapel Baptist Church was started in 2002 for the purpose of glorifying God through biblical preaching, traditional worship, and personal discipleship. We seek to live in obedience to the Word of God as we teach and train believers, equipping them to do the work of the ministry as they live each day according to God’s Word.

Learn More About Our Beliefs Pastor Brock Mawdesley grew up in Michigan in a Christian home where he accepted Jesus as his Savior as a child. After graduating from college and beginning a career in graphic design, he felt the Lord’s call to full time vocational ministry. Pastor Mawdesley pursued further education at Bob Jones University Seminary and graduated in 2006 with an M.A. in Pastoral Studies and a Master of Divinity degree. In 2008, God called the Mawdesleys to Upper Cross Roads Baptist Church in Baldwin, Maryland, where Pastor Mawdesley served as the ministry’s youth pastor. In September of 2019, the Mawdesleys once again felt God moving them and Pastor Mawdesley accepted the position of senior pastor at Village Chapel Baptist Church in Weare, New Hampshire.

Leslie Mawdesley grew up in Maryland and accepted Christ as her Savior by her mother’s bedside when she was 5 years old. She committed herself to full-time ministry after her youth group went on a missions trip to Mexico. She studied Spanish at Bob Jones University with a burden to serve the Lord on the foreign mission field. The Lord eventually led her to graduate school at BJU, where she obtained a master’s degree in counseling. Brock and Leslie were married in June 2003 and have been blessed with four boys: Arden, Luke, Kendall and Hudson. 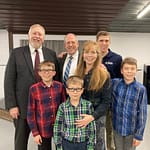